I guess my fear and deep hate for the cold came from way back to when my memory where first developed. At least, to a degree that I would bear it with me the rest of my life. It was in an orphanage outside of Moscow where my parents decided to put me, so I would not cramp their style at the countless parties witch went on in our apartment.
Of course, nine months in the arctic as a soldier, only added to the bad relationship I had with sub-zero temperatures. This was of course long before I had any notion of becoming an author. Later in life, I dreamed of sailing around the world, preferably in the tropics, and so I did. It took me five years to build the boat, and a few months short of two years to arrive in Tahiti.
It was at the beginning of this adventure that I first blew the dust of my old typewriter, put a in a sheet and wrote: “Chapter one.” Exactly at that moment, the screaming started. I peeked out through the window, and could see black smoke billow out from a boat belonging to a Swedish couple. A quick swim later, I saw my good friend Eva being slowly led up the ladder to the deck, all the time screaming continuously. From where I was standing, I saw she had no hair left on her body, both her thighs and overarms where chapped open like a sausage which had been boiling too long. A gas explosion. That is a sight that burns itself into your memory.
The blank sheet in the typewriter remained there until I was forced to make my way further south. For the first time single handed.
But this is not a story about sailing. When I think back to all that time I wasted on brainless parties, short meaningless relationships, and feeling sorry for myself. Although, that last part didn`t start until I called the doctor in Norway and got the death sentence in 1989. I had HIV. I remember all those letter I had to write, and the very unpleasant conversations with many woman in Norway.
That was the beginning of a decade of wallowing in self pity, alcohol, paranoia and depression. A lost decade.
After a couple of unsuccessful suicide attempt, I got myself back in the game. Translating meaningless cartoons for TV. And one book. They say creativity is the measurement of a sound mind. I had neither. So I gave myself a last chance. Go to South-East Asia, the only place I had never been, and just see what would happen. Take a wild guess. Yes. Love happened. And my daughter Nina.
Thank God, I have learned a few things since then. I was married for nine years, some happy, but most not so. But I was not going to watch my daughter go down the same path as her mother. Again, with all the resources I had to my disposal, no writing.
I`m not sure what started it. Just remember I was sitting at one of those amazing cafès by the beach, and the story just came to me. From then on I was hooked.
I don`t write on the beach anymore. It`s too distracting to see that beautiful turquoise water, and start day-dreaming. I need to be inside the story, make sure every little thing is at the place it should be. The view of a gray cement wall is what I need.
It`s weird in a way. The only place I feel fulfilled, is here, in front of my computer, writing. 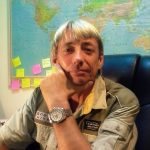